Timor-Leste: harnessing R&I with the setting up of a National Digital Repository and a specific STI policy framework

HomeNewsTimor-Leste: harnessing R&I with the setting up of a National Digital Repository and a specific STI policy framework

As a result of an OACPS R&I Policy Support Facility service in Timor Leste, two feasibility studies were prepared, marking a significant milestone towards creating an innovation-led and knowledge-based economy.

Held virtually on 24 May 2022, the closing event of the OACPS R&I Policy Support Facility (PSF) service in Timor-Leste was attended by around 30 key national and international stakeholders, representing various ministries (Ministry of Higher Education, Science and Culture, Ministry of Foreign Affairs and Cooperation and Ministry of Tourism, Commerce and Industries) and institutions in Timor-Leste, the Secretariat of the Organisation of African, Caribbean and Pacific States (OACPS), the Pacific Islands Forum Secretariat and the European Union.

The main objective of the PSF service to Timor Leste, requested by The National Institute for Science and Technology (Instituto Nacional de Ciência e Tecnologia -INCT), was to carry out two feasibility studies for the development of Science, Technology and Innovation ( STI) policy framework and the setting up of National Digital Repository (as a critical element in the STI framework).

Chaired by Dr. Dionisio Soares Babo, a Panel of four high-level experts, worked on this PSF service between October 2021 and May 2022 and conducted desktop research, completed by a series of interviews with key national stakeholders (over 30 institutions were engaged), in close collaboration with the national team and the PSF team.

The feasibility studies are part of a final report, which was presented during this final event.

In his speech, Mr. Jose Cornelio Guterres, Executive President of INCT reminded that a budget has been already allocated in 2023 for the creation and implementation of the National Digital Repository, and expressed his willingness to “continue expanding the network of cooperation with other national, regional and international stakeholders and organisations”

Resonating with these remarks, the Assistant Secretary-General of the OACPS Secretariat, Dr. Norbert Richard Ibrahim, highlighted that “this repository will be a gateway to international knowledge and will facilitate and stimulate the absorption of national and international knowledge within Timor Leste.” Acknowledging the revolutionary potential of ‘Open Science’ in reducing the digital, technological, and knowledge divides, he also announced that a regional workshop on this topic will be organised in June 2022, in collaboration with the Pacific Island Forum Secretariat and INCT.

Ambassador Andrew Jacobs, Head of the Delegation of the European Union to Timor-Leste, mentioned the beginning of “a new era where digital technologies will increasingly merge with the physical world and become a significant tool for sustainable development. (…) But there is much more to be done to put technology at the service of people. (…)Through our new bilateral cooperation programme, we are looking at how we can best promote further digitalization and data technologies while paying special attention to bridging the digital gender gap.”

Ms. Melina Nawdra, Acting Director of Policy at the Pacific Island Forum Secretariat, also emphasized the need to “ensure that gender and social gaps and inclusivity are addressed and included in all phases of implementation and monitoring, and that traditional knowledge is protected through this process”.

Dr. Maria Filomena Lay, Director General at the Ministry of Higher Education, Science and Culture (MESCC) concluded the final event by recalling the importance of a STI policy to strengthen the country’s R&I system. 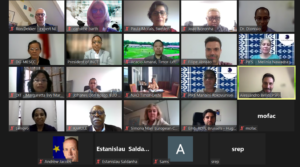 Some of the main highlights from this final report include:

For both the STI policy and the NDR, continuity of actions is highly recommended by the PSF Expert Panel, referring to annual budgeting, but also to investing in human resources, setting up communities and networks and establishing an evidence-based monitoring system.

Launched in January 2021, the Policy Support Facility is one of the components of the OACPS Research and Innovation Programme, implemented by the Organisation of African, Caribbean and Pacific States (OACPS) and funded by the European Union (EU) to unlock innovation potential in the 79 OACPS member countries.