The Government of Timor Leste, through the Instituto Nacional de Ciências e Tecnologia (INCT), has requested the support of the OACPS Secretariat to enhance its research and innovation (R&I) system and strengthen the cooperation between its key actors.

The virtual kick-off meeting marks the official start of the Policy Support Facility (PSF) service that will assist the country in further developing its R&I system, by making better use of research results and by increasing collaboration between its key R&I actors (government, higher education institutes, industry and civil society).

The official launch (12 October) has brought together over 40 key national and regional stakeholders, representing among others the Ministry of Higher Education, Science and Culture, the Ministry of Foreign Affairs and Cooperation of Timor-Leste, the OACPS Secretariat, the European Union (EU) Delegation in Timor Leste and the Pacific Islands Forum Secretariat, but also national universities and research centers.

This PSF service will provide a basis for the creation of a digital repository giving open access to research results in order to improve the efficiency of research and boost innovation. It will also contribute to the setting up of a specific STI programme, in line with the National Strategic Development Plan (2011-2030), the UN 17 Sustainable Development Goals and the SAMOA Pathway. And it will give policy recommendations on an open science policy.

Speaking on behalf of the OACPS Secretariat, Dr. Norbert Richard Ibrahim, Assistant Secretary-General (ASG) of the Department of Political Affairs and Human Development (PAHD) acknowledged “the revolutionary potential of open science in reducing the digital, technological, gender and knowledge divides that exist between countries, but also between individuals within the same country.  It is urgent for the country and the region to bridge the divides, by including the excluded.”

Mr. Andrew Jacobs, Ambassador of the EU to Timor- Leste, reminded the EU’s deep conviction behind the OACPS R&I Programme and its Policy Support Facility. “R&I are key levers for sustainable development.” (…) “The recognition and promotion of scientific culture and the capacity of a country or a region to produce knowledge contribute to its development and ensure its full participation in the global economy.”

Hoping that the future digital repository will be used by other countries of the region, Mr Sione Tekiteki, Director for Governance and Engagement at the Pacific Islands Forum Secretariat, encouraged the PSF mission to ensure that gender gaps and the promotion of traditional knowledge are well addressed. ”A national repository provides the opportunity to integrate issues such as key social data and at the same time transition towards a digitalised world in a systematic manner.”

The Director General of the Ministry of Higher Education and Science, Mrs. Maria Felomena Lay,  representing the Ministry of Higher Education, Science and Culture concluded the official launch by underlining the importance of a well-organized and institutionalized scientific research system:  “ Today there is a consensus that, without a robust scientific system that integrates into the within coordinating bodies like INCT, but also the universities, as well as public institutes under the supervision of the various ministries, it will not be possible to implement public policies with profound impact on our lives.”

The PSF service will be carried out over a period of six months, by an Expert Panel of four high-profile specialists in different R&I domains who will actively collaborate with the national team (led by Mr. Jose Cornelio Guterres, INCT’s Executive Director) and the PSF team. 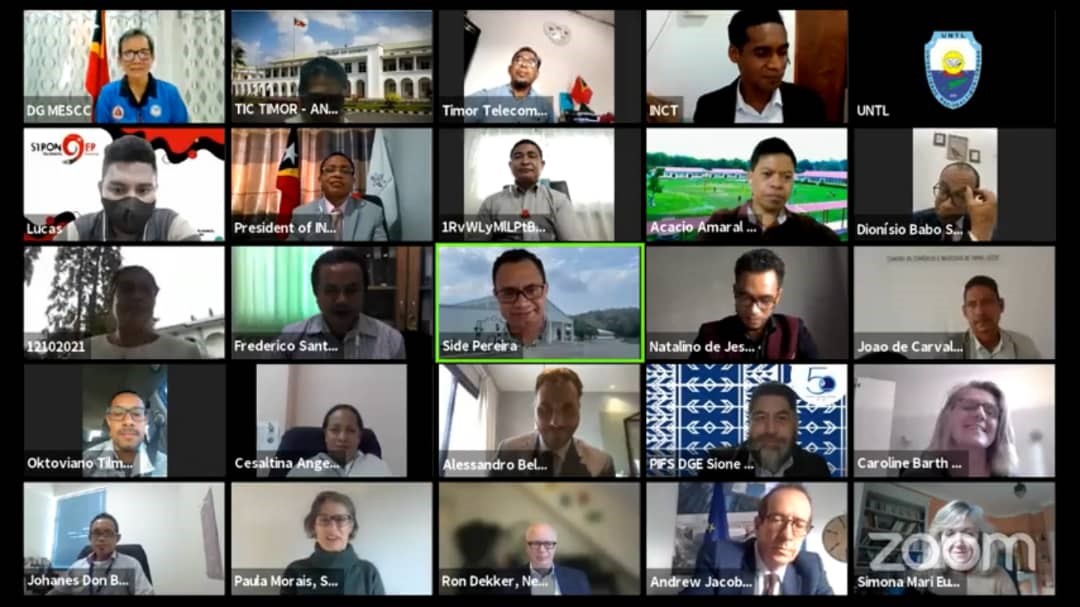 Photo: Representatives of key stakeholders at the vitual kick-off meeting of the PSF service in Timor Leste

For more information on this PSF service, please download: