Nick Ishmael Perkins is a senior consultant with the International Science Council. He is currently running a programme called the Public Value of Science, which is building an understanding of misinformation, disinformation and trust in science. Before this, he worked in research communication for almost 20 years, notably for the think tank “Institute of Development Studies”. And he has also contributed largely to what we would call developmental communications, across a variety of sectors, from public health to governance to the environment. He was also the director of Scidev.net, a science journalism platform for the Global South, which covers climate science as one of its editorial priorities. And he is the artistic director of Wretched Theatre, a British company that does multicultural and collaborative work principally with migrant artists.

According to the sixth IPCC report on the climate crisis, the window of opportunity to combat climate change is closing fast. The UN Climate Change Conferences follow one another and it seems that we are not going fast enough and far enough. Scientific evidence on the one hand, slow political action on the other. Where does the problem lie, according to you?

I think there are two areas that are frustrating progress in this area. The first one is that not enough work is being done on understanding research uptake. And meaning-making. What we’re talking about with climate science is a very good example of what would be called post-normal science. This is a phenomenon that describes science as now being very interlinked with quite complex ideas about how society envisages itself. I give you a concrete example, this is no longer the kind of science that might be associated with the discovery of penicillin. Now, a lot of the science that we are describing and interrogating has quite profound implications for our societal values and our vision about what kind of society we are, and by extension, and this is the important part, changes to the way that we live, with quite fundamental disruptions around our social and economic relations. Therefore, it becomes actually really important to understand how science is being received and the implications of scientific discoveries, or indeed the diminishment of scientific uncertainty. We have been very focused on science as a self-evident kind of knowledge-building exercise, and we have not sufficiently appreciated how complicated and complex that can be. And a really good example of this is the move from storytelling to storylistening. There are two researchers Claire Craig and Sarah Dillon, from Oxford and Cambridge respectively,  who have been doing a lot of work around this issue, understanding the way that narratives are built, how they are internalised, and the link between how we listen and our social identities. That has very profound implications for the resistance to climate science and in some cases actually the lack of effectiveness of climate science communication. The second area is around this reliance on science to innovate, which took the responsibility away from political and policy innovation. And the reason for that is because of the paradigm shift, which is, again, really fundamentally disruptive and unusually challenging. 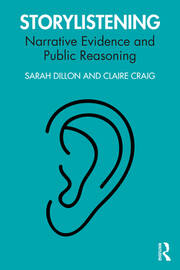 How has climate change communication evolved in recent years? Could you mention some positive developments and on the contrary some gaps that remain to be filled?

I think a couple of things need to be acknowledged around the whole climate change communication progress. The first is the acknowledgment of the importance of communication itself in climate science. It is now inconceivable that you would have any kind of research programme of any substance on climate change that would not involve some kind of communication or outreach. And when you look at other disciplinary areas within science, you realise that it is not an achievement to be taken for granted. The other thing is that there has been a shift away from what we would describe as the deficit model, which is to say that actually you assume that everybody else just doesn’t know what’s going on and you just have to tell them.

Another noticeable positive development is the recognition by the IPCC that their report comes complemented by adjacent communication outputs, underlining the importance of stakeholders. It’s not just a specific policy audience that needs to be engaged, but there are other stakeholders that also need to be mobilised. This segmentation of audience is really important progress, as is the focus on the clarity of the call to action. The kind of simplification, which some people will see as problematic, has been able to generate a lot of traction within the media and the policy audience. The 1.5-degree change campaign is a very good example of that. The other thing, which is good for science communication generally, and particularly for climate change, are the efforts to bring social policy and regulation into digital platforms, acknowledging that there is a kind of decentralisation of editorship. We are just at the beginning of that and there is still further to go. Now, we really need to develop a new orthodoxy around how we communicate research. We need to be working in a more transdisciplinary way. We need to be thinking more about co-creation and less about directive messaging. We need to understand a lot more generally about how science is received and how people make meaning of science. We need to get much more sophisticated about our audience segmentation. We have to recognise that people as individuals, societies, and communities have quite complicated relationships around science and technology.

Climate change scientists have an important role to play in supporting policymakers and the public to accelerate collective action. What specific message would you like to address to them in addition to what has already been said?

Two things. They should not let the challenges discourage them. And they should be more aware of their own position in society and how they relate to audiences.

It is a secondary concern. There is this apocryphal story actually with Nixon saying, “don’t tell me the facts, tell me what they mean”. It is extremely useful advice for engaging policy audiences; if scientists can’t help them understand the implications then someone else will. And this brings me to the point about awareness of your position in relation to the audience. Knowing this helps understand what they need to say, who indeed you might need to be saying it through.

We also need more transdisciplinarity, not only working with people across different disciplines but also with different areas of expertise. The value of doing that is being able to negotiate options for what does this mean. Climate science has profound implications for the way that we organise and live our lives. Recognising that this live experience draws on different areas of expertise is extremely important. The International Science Council has been running a programme called LIRA, supporting transdisciplinary research projects in Africa around urban settings. And it has been a real eye-opener because the percentage of projects with real policy impact has been exceptionally high relative to our average research initiatives, and that is because of the way that they designed it right from the outset.

You have a post-graduate degree in anthropology and international development, and you are also the artistic director of a theatre. How social science and art can help to communicate better on climate change? What are some of the most important science communication lessons we have learned over the past years to better tailor climate change messaging?

Science and art go back a long way together. It works best where you can reconfigure our dreams and our nightmares as individuals and as a collective, do something that captures the popular imagination and in turn, get us to look differently at the way that we live our lives. Fritz Lang’s “Metropolis”, Orwell’s “1984”, and more recently “The day after tomorrow” around climate change are some good examples. The theatre for development, promoted by Augusto Boal et Paulo Freire, is a profoundly political way of approaching theatre that looks very carefully at issues around power and lived culture. It is not about directive messaging, but about co-creation, drawing on participatory process. What is interesting about this theatre for development process is how it resonates with the issues that are exercising the science communication scholarship at the moment. It’s about process and relationships and is at the other end of the spectrum from thinking about the mechanics of policy briefs.