David Obura is director of CORDIO East Africa, a non-profit organisation registered in Kenya that supports the sustainability of coral reefs and coastal ecosystems in the Western Indian Ocean. Marine biologist by training, he is very well known in the coral reef science community for his work over the past 25 years on coral reef resilience, in particular to climate change, and the biogeography of the Indian Ocean. He is co-author of the Sixth Status of Coral Reefs of the World 2020 report. And he is currently involved both in some of the UN climate discussions around climate and oceans for Africa and in discussions on the post-2020 Global Biodiversity Framework and its targets, which are being negotiated under the Convention on Biological Diversity.

How close are coral reefs to reaching tipping points today and have there been any notable positive developments in recent years to protect them?

We estimate globally that we have lost close to 50% of the world’s coral reefs, because of multiple impacts (climate change, pollution, overfishing…). As the trajectory of warming and acidification for the next 20 to 30 years is more or less set already by the emissions that have already been made, even if we do meet the Paris Agreement with the best possible outcomes, we are still going to lose 70 to 90% of coral reefs globally. Of course, we will not really know for another ten or 20 years once we have more data on what has happened. I think that we have already crossed the tipping point, and it is perhaps one of the first global ecosystems to really qualify for that. For positive developments in recent years, I think of awareness. There are many actions to protect coral reefs locally, not only for biodiversity and conservation but also to sustain livelihoods and the benefits people get from the reefs. There has been a lot of investment in coral reef restoration, new techniques to try and restore reefs or slow the decline. But the immensity of the global change challenge is so big that even if many of these efforts can improve local systems marginally or better than they would be without those interventions, they can’t really address the wider scale issues of broader environmental decline.

What are the other major threats posed by climate change to oceans and coastal areas?

We use the slogan that climate change is making the oceans hot, sour and breathless. Seawater is warming and this has many implications. Seas are also becoming more acidic because of the carbon dioxide dissolving in seawater. That’s a big challenge for many organisms to deal with, particularly those with carbonate skeletons. And then also deoxygenation. Warmer water can’t absorb as much oxygen. So as the water warms, it becomes increasingly deoxygenated. And at the same time, warmer temperatures drive microbial communities faster so they consume more oxygen, as do algae, and other organisms. Eutrophication and pollution from land are also driving deoxygenation. So these are some of the biochemical impacts that are really affecting marine systems. In addition to that, you have sea level rise, which is a big challenge for the terrestrial ecosystems of the coast and also for people living by the coast. And in addition, we have changing storm patterns and weather patterns. Evaporation of water from the surface really drives the global climate and the atmospheric conditions, with El Niño and La Niña cycles becoming stronger and more intense, and with bigger variations between the highs and the lows of these cycles. All of these instabilities are being driven by climate change. 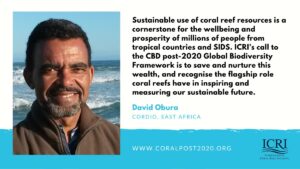 You are also co-chairing until 2024 the Nexus assessment conducted by the Intergovernmental Science-Policy Platform on Biodiversity and Ecosystem Services (IPBES). This work programme will examine the multi-scale interlinkages among the sustainable development goals related to five main elements biodiversity, climate, food, water and health. Why this nexus approach is both indispensable and challenging?

The nexus approach is indispensable because we are realising that all the challenges that we face are interconnecting. There are very few single-issue crises now, whether it is climate or food systems and hunger or flooding challenges, or the COVID pandemic. They are all driven by many different parameters. So we must think in a much more interconnected way. Of course, it is very challenging because we must think in more complex ways, but also because increasingly, many local challenges are being driven by larger scale drivers –at national, regional and global levels. How do you address those when you only have finite resources in a local context? At the global level, it is very challenging to plan from a top-down perspective, even in single sectors. But when you try to address all of these complex, interconnecting challenges together, it’s even more challenging to do this global scale, top-down planning. We hope the nexus approach will help all actors to resolve these challenges within their own contexts.

This programme is conducted by a multidisciplinary team?

We are over 170 authors, from all over the world, working on various chapters. We have biological scientists, resource scientists, social scientists, economists and finance experts, all trying to look at the multitude of factors. The five elements we are looking at in the nexus assessment are drawn from the 17 Sustainable Development Goals. Therefore, we need all of the sciences and expertise to come together from all of the 17 major domains. And we are incorporating an important contribution from indigenous people and local communities because we need the representation of multiple perspectives and value systems from around the world and the multiple experiences that people have around the nexus we are looking at. It is quite a complex process of bringing all these people together and trying to assess the state of the nexus on the planet and how we move forward. 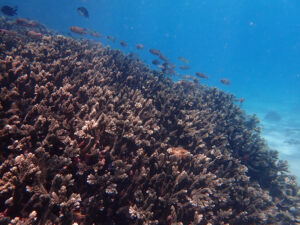 What are the most promising areas for African, Caribbean and Pacific researchers and innovators who would like to contribute to enhancing the resilience of oceans and coastal zones to climate change?

One thing that we really need to promote is locally-based information, knowledge and science on many global issues. Sea level rise, what is happening with storms, flooding or droughts in the coastal zone, changes in the currents and things like that. Basic science is still very important, so it is critical to developing local and national capacity for science. We need to understand the basic dynamics and the complexity of issues, across the environment, the climate, the weather and oceans, species and ecosystems, and how they are changing with global change. And on top of this social dynamics – how people depend on those ecosystems, how decisions are made, who’s involved in decision-making and the governance and equity of making sure that all people are included. A last really critical area we don’t often hear about is that many ACP countries are in equatorial zones, which is the warmest belt around the equator. We often hear that because of climate change, species are moving towards the poles. In temperate zones, species are poleward, but other species are moving in from the equator. But in equatorial zones, while we have species moving out, there are no other species moving in, as there are no warmer environments that species are leaving from. And so understanding what this loss of species diversity and likely functions means for the productivity and stability of ecosystems, and of fishing and agricultural systems is critical.

The UN Decade of Ocean Science for Sustainable Development (2021-2030) encourages the development of good science to ensure the conservation of the ocean, the sustainability of its uses and the protection of ocean health. What place do you think policymakers should give to nature-based solutions in their ocean and coastal zone adaptation strategies?

Nature-based solutions must use ecosystem-based approaches and must be fully compatible with local ecosystems, with local needs that people derive from those ecosystems. If you are implementing carbon sequestration, you need to do it in ways that can also support food production, or that assure the supply of other ecosystem services, such as protecting the soil from erosion. Done the right way, nature-based solutions are perhaps the most important weapon in our armoury for dealing with climate change, as well as other future challenges, especially for poor communities or rural communities that are very dependent on natural systems for agriculture, fisheries, etc.

CORDIO works quite a lot in the science-policy domain. What major obstacles do you have to overcome in order to move more quickly from science to action?

You have to invest a large amount of time not only in science but also in communicating it effectively. That means really understanding its context, who the audience is, who the stakeholders are, what are their perspectives, and how their perspectives affect how they absorb or interpret the information you present. In many cases, we may not be presenting the right information or in the right way for those stakeholders to make decisions that are important to them. 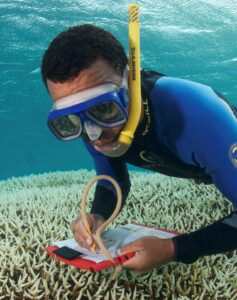 Would you like to add a message around COP 27?
Let me try perhaps two messages. The first one is around the nexus ideas and using the full breadth of sustainable development goals to resolve the climate and other crises. In the conservation community, we have focused too much on just ‘the best areas’ for biodiversity and as a result, ignored both the drivers of decline and how they originate from wealthy countries and the need to sustain nature and its services to people everywhere – particularly were local and indigenous peoples make their livelihoods from nature. We need to understand how global goals, such as for climate or biodiversity need to be translated to local levels for local-level decisions on how to contribute to them. And put the right amount of resources into paying for all this to work.

My second message is about the new ocean and climate agenda under the UNFCCC. I was involved in COP26 trying to help African countries identify what’s in it for them. And of course, many countries are very hesitant to accept a new domain of action, because it needs more expertise, more resources, and larger delegations to deal with the complexities. So many resisted this. But at the same time, it’s critically important for Africa, where there is potential for the blue economy to support development while sustaining coastal systems and oceans. So we should welcome this new ocean and climate agenda. Hopefully, with COP 27 being in Africa, there will be a very strong consensus and lead from Africa, saying what African priorities are for oceans and climate and biodiversity together, to have those become part of the UNCCC agenda moving forward.