Interview with Monica Kapipiri, consultant and AWARD trainer, on the place of African women in agricultural research and development

HomeNewsInterview with Monica Kapipiri, consultant and AWARD trainer, on the place of African women in agricultural research and development

Monica Kapipiri is a Ugandan consultant with over 20 years of experience in training – she is part of the African Women in Agricultural Research and Development (AWARD) team of trainers – in leadership, mentoring and coaching, science skills, negotiations and gender integration. She has worked with both local and international NGOs, research, and government agencies, including the EU, FARA, CARE International, RUFORUM, USAID and the World Bank. In this interview, she gives us her views on the place of African women in agricultural research and development.

You hold a Master’s degree in Environmental Science and Natural Resource Management, you are a development facilitator, mentor and coach, and your life purpose is to empower rural communities in Africa, to unleash their development potential. How do you link these facts?

As a development facilitator, mentor and coach, I recognise the role of other people. Because Africa is enormous and extremely diverse, you cannot reach it alone. But if you work through other people, then you can achieve a lot. So, I invest in other people, every opportunity that I get to reach their communities for economic development, sustainable natural resources management, climate change mitigation. As an independent consultant, I work with all sorts of people, in various sectors, and what I do is to make sure that they start thinking about rural communities, vulnerable populations, and how to help Africa bring out its potential. The potential is there. It is now helping other people see it and unleash it.

It is not that women are not involved; they are and may even outnumber men. The issue is that the majority are at the bottom rank. They are the research assistants, the labourers in research plots for field trials on research institutions, the ones that sort the seeds, etc. They are there, but when it comes to sitting at the decision-making table that decides which research to be done, which priorities to focus on, that’s where the gap comes in. I am not saying men cannot design gender-responsive research. They can and some do, but the majority are not trained to see multiple identities that make certain people miss out on opportunities. Women tend to look out for diversity, while men tend to seek homogeneity/uniformity. This seemingly small difference makes all the difference and that is why having both men and women at decision-making tables will make research richer.

What do you see as the main obstacles to the greater participation of women in agricultural research?

As I said, it is not that women are not participating in great numbers, it’s the level at which they engage. The underlying obstacle is socialisation, the process of learning and internalising gender norms assigned to individuals or groups of people, according to whether we are born male or female. Socialisation occurs throughout the life cycle, beginning as early as when a woman becomes pregnant and people start making judgments about whether they desire a boy or a girl, and what is an appropriate life for each child. Gender is a social construct of prescribed, meaning pre-arranged roles, responsibilities, expectations, characteristics, behaviours, rights, privileges and even exclusions. They say “oh you are a girl, you can’t do this”. You grow up with that in your head. So, when you get married and you are a young woman, a young scientist, where will your first allegiance be? To your job or to your husband and his family? Will you be proud to be called a successful mother or a successful researcher? Because of this socialisation, most of the women keep putting off pursuing their master’s degree, their Ph.D. until their children are old enough. By that time, some of them are too old for scholarships. So that’s why they stay at the bottom of the ladder, or give up.

How can a participatory approach contribute to gain a deeper understanding of gender reality in agriculture and better research work?

For example, I was providing programme support to a university research team working with cassava, a staple food for Eastern and Northern Uganda. Cassava was attacked by viruses that threatened to wipe it out. Researchers have since bred and released a number of varieties of cassava. Farmers in this programme were given four varieties, thought to be very good. They grew them, ate them, and then we went back to find out which one they wanted. 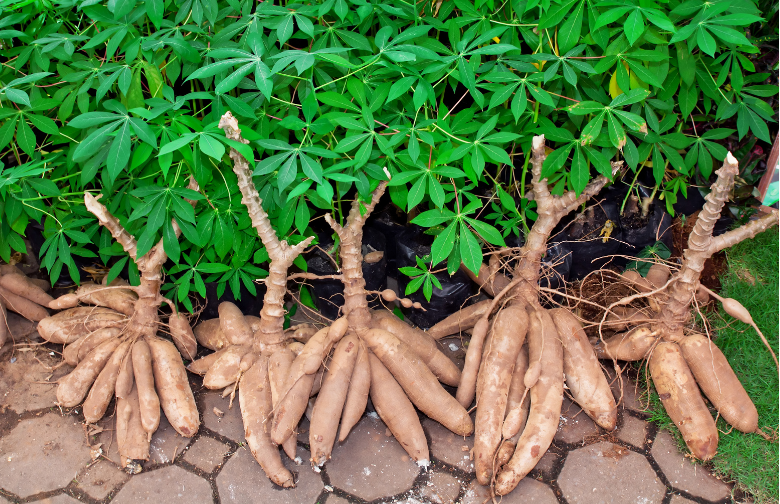 Instead of listening to the criteria given by the researchers (“it’s resistant”, “it grows very fast”, etc.), I asked the farmers to list their own criteria and they came out with 24 characteristics, including the shining of the leaves! There was a variety that the researcher really liked and thought could be adopted. The women- said that variety is like a handsome man who comes wearing nice expensive shoes. But when he takes off his shoes, you realise he is a leper without toes! To them, that variety had very good characteristics in the garden, the tubers, but during processing for food and flour, it turned out poor. Both men and women ranked the same variety as their best: women because it was good for food, men because it was good for selling, especially to breweries. The variety weighed more, even when dried. So, a participatory approach helps you to get the perspective of the people. What is it that they are looking for? And then, when you design your project based on what they want, they will take it up without reservations.

You have a long track record as a trainer for the African Women in Agricultural Research and Development. How are organisations like AWARD making a difference to African women involved in agricultural research and development?

If I can put it simply, it’s helping them write another script about their lives. Their own script. And then play it out. 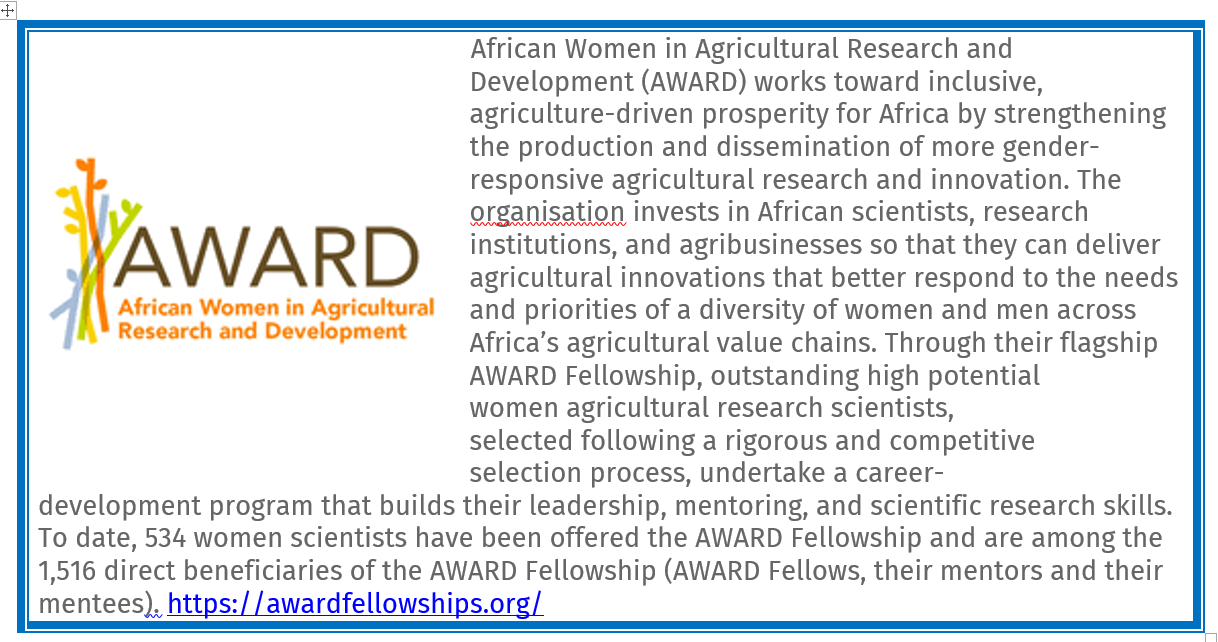 You teach them how to raise funds, write scientific publications and proposals, but also how to behave and fight prejudices. Could you elaborate further about this psychological dimension of your training and how important are role models for women in science?

For women, to get up the ladder and to become leaders, they must understand and accept themselves, and the people they lead. Most of the mainstream science training in colleges and Universities does not look at psychology and soft skills. So, in our training, women are given a personality assessment, MBTI or Personality plus. There is a saying that we love: “There is nothing wrong with me, I am just not you”. The MBTI assessment helps women realise that there are 15 other personality types besides their own. So, they become more accommodative, they start looking for ways of working with diversity, instead of trying to change people to be like them. That’s a big thing! Besides this personality awareness, we also train them in strategic influencing, gender, and networking. And lastly, the women are required to “do” a role modelling event with other women. This is often the first of many such events. Some of them went back to their primary and secondary schools to help encourage more girls to take up science. Others went to women farmers to encourage them to invest more in farming as a business, and so on.

What are the most positive developments you have seen in recent years for women involved in agricultural research and innovation?

The stories are many! As trainers, our interaction with trainees after the course is limited. However, in 2016-17, I participated in what was called regional meetings. This is where the women come in after two years of being mentored and tell their stories. I cried, and I thought, “Oh my goodness, this thing works”. For instance, there was a very young girl, a post-BSc woman from Nigeria. Her purpose roadmap was to change the lives of 20,000 women and youths in Nigeria. By the time of the regional meeting, she had written winning proposals, acquired money, and was already working with women and youths.  Another woman, who had just received her Ph.D., was able to fundraise for a state-of-the-art biotechnology lab in Ghana. This was a big achievement for the university. Normally it would have taken her four years of publishing, teaching, and fundraising to receive the title of Professor. With the biotechnology lab as a major output, she used the negotiation skills and persistence, assertiveness, kept applying, and got the professorship after two years! 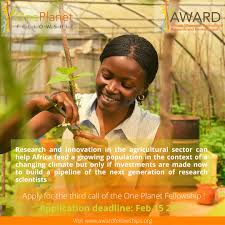 For a woman who would like to embark on a career in agricultural research, what would you advise in a few words?

Go ahead! But you must have the passion, clear goals, you must be ready to build essential networks so you are not isolated. You must work hard, and you will make it big time!