In the run-up to our upcoming debate on sustainability science, an innovative voice, that of Dr Heide Hackmann, an international science diplomat, advisor and policy maker. Former Chief Executive Officer of the International Science Council, she is now the Interim Director at the Future Africa Institute, a research institute and Pan-African platform based in her native South Africa, to which she returned recently after some 30 years abroad.

How would you define the Future Africa Institute’s DNA in a few words?

I would say that it is about developing and then unleashing the transformative potential of African science, sciences because we mean all sciences, for the benefit of African societies.

You spent nearly 30 years abroad and returned recently to South Africa. What major changes have you seen in the African landscape of research and innovation?

Please remember that I’ve only been back for three months. But if I think more from the perspective of my previous job in the global arena, and certainly from what I’ve seen in the first three months back in Africa, I would say that notwithstanding the overall need for continued development of capacity and investment in science and technology on the continent, what I think is interesting is a growing recognition of the real need for Pan-African collaboration, which of course speaks also to the mandate of Future Africa. From a global perspective, I think what we see is a recognition of not only the fact that there is scientific excellence on the continent, but also that African science needs to have an equal voice in the global arena. And so the emphasis on building transformative global partnerships, partnerships that are open, inclusive and diverse, I think, is an interesting duality of developments for the continent and for the global benefit.

You said once that all contemporary global challenges are transnational and require input, expertise, and influence from all over the world and Africa has a lot to offer. What can Africa bring to the rest of the world?

I think from any perspective, no matter where you are in the world, global solutions need contextual understanding, and historical understanding. So that’s one really important element for African science, It is to contribute to that contextualised understanding, in order to contribute effectively to global solutions. But beyond that, I think that there are particular perspectives and approaches and methods in Africa, regarding issues of well-being, the connectedness of humanity, the human-nature relation, and communities’ involvement in science and sustainability, that are unique to Africa and that we need to learn from. It needs to be shared as part of our search for solutions. Of course, there is also excellent science on the continent and that science is recognised globally. So we mustn’t forget that. And finally, I would say, don’t forget that Africa has a very large young population. And if we think of young people as agents of change, both in science and society, then Africa has a lot to offer.

The Future Africa Institute will host in a few days the second Sustainability Research and Innovation Congress .What is the ambition of this event?

The events are annual global events, really convening a transdisciplinary, in other words, a multi-stakeholder community of sustainability science experts, scholars, researchers and practitioners. And I think the primary goal of these events is, on the one hand, to advance knowledge, to share and advance our knowledge on sustainability science, but also through transdisciplinary approaches to advance and advocate action. And it’s time for action, as we all know. So, this is an important event, and we need to ensure that the focus is on solutions, actions. What do we do in the current context, with time. You know, the clock is ticking for the SDGs, for us to deliver on those. We need to understand what science can we still do at the moment to ensure that we do achieve the SDGs.

And what are the critical challenges to overcome in Africa in order to harness the potential of sustainability research and innovation toward achieving the Sustainable Development Goals?

I think we’ve touched on some of them, but I would say, first and foremost, it is an investment in science and technology. That remains a critical issue on the continent for many of the countries. But beyond that, you know, this notion of Pan-African collaboration is also about defragmenting our efforts when it comes to contributing. There are, on so many fronts, on so many initiatives, pockets of scientific communities working together. And if we could somehow coordinate, defragment those efforts and foster more meaningful collaboration across the continent, I think that would be tremendously valuable. And we definitely see a lot of initiatives in that direction. For example, with Future Earth, you know, the good news is that South Africa will host a Pan-African global hub for the Future Earth Secretariat. The award was made to the National Research Foundation which submitted the proposal. And one of the ambitions there is definitely to defragment the scientific community on sustainability, expand it as well, but defragment it, coordinate, and foster collaboration, so that African science or sustainability science has a stronger voice in the global arena. And full integration in the global arena is the other thing that African science needs. You know, transformative partnerships, full integration under conditions of equality, mutual respect, and openness to harness the diversity of knowledge and perspectives that you get on the continent.

Transdisciplinarity is one of the keywords guiding your mission. What place do you give to indigenous knowledge systems in general and in particular within your institute?

You know, as a transdisciplinary platform, we believe that there is a voice for all knowledge systems to participate. But I think what is important is that we need to foster appropriate transdisciplinary. In other words, who you involve beyond academia depends on the issue you’re resolving. So clearly indigenous communities are important to many issues. The two issues that are top of the agenda for Future Africa at the moment are sustainable food systems and One Health approaches. And, you know, indigenous communities have voices and perspectives and insights that are valuable to bring to the table. But you also have to ask, how do we define indigenous knowledge? You know, is it the practitioner? The person working in a mine? Or in the industry? You know that is also tacit local knowledge. So we believe in the diversity and inclusivity of knowledge and production processes, as long as it’s appropriate to the problem being solved. 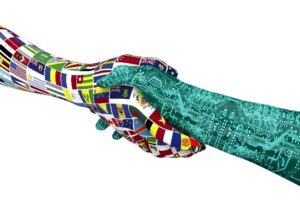 That’s a difficult question. You know, there are different interpretations of science diplomacy. But, whether you’re talking about diplomacy for science, science for diplomacy, or science in diplomacy, they’re all important. I would say, if you think about what’s happening in the world today, about the new geopolitical context that we’re moving into as a result of a new war, then you could argue that science diplomacy is more important than ever before. And it’s really that collaboration of science and diplomatic work for a better world. Science diplomacy is at the heart of the ambition to advance science as a global public good. And that is something that Future Africa also cherishes. Science diplomacy is inherent in our work in fostering collaboration across the continent and between Africa and the rest of the world. There is a community of science granting councils that have put science diplomacy on the agenda, which is very encouraging. I’m not aware of other specific training programmes, but it’s an interesting thought for us, at a Pan-African level, to develop those, because it is really fundamental. And you know, there are good traditions in science diplomacy training elsewhere in the world from which we can learn, but develop the African version.

There are no places on the continent where you can be trained in science diplomacy?

You know, I stand to be corrected, but I’m not aware of any. There is, of course, under the umbrella of the International Science Council, an international network of government science advisers. And that network has an African chapter, which is chaired by the head of the Nigerian Academy. And I think it’s fair to say that a lot of the work done by that network also has clear strands of science diplomacy. They have a network also of advisers to ministers of foreign affairs. And so, there are initiatives in Africa, but they need to be strengthened and we will try to help them from a future Africa Pan-African perspective.

What would you say if someone asked you what skills are needed to be a good science diplomat?

What would I prioritise? I would say humility. About one’s role as a scientist and what the appropriate role is, as both a science adviser and in a diplomatic setting. And open-mindedness to collaboration, inclusivity, and cultural contexts.